The late Pleistocene, from around 125,000 years ago, megafauna started to disappear. A new study puts the blame squarely on humans and our hominin relatives.

By looking at how mammals have changed in size over time, scientists discovered that, whenever humans are around, the mammals that disappear tend to be 100 to 1000 times bigger than those that survive[1]. The new analysis shows that this pattern occurred in every continent except Antarctica, and throughout at least the last 125,000 years. 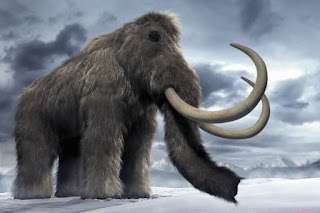 “Size-selective extinction is a hallmark of human activity,” lead-author Smith says. In other words, when we’re around, big animals die.

The distribution of body size is generally related to the size of a land mass. Africa is smaller than Eurasia but bigger than the Americas, so you’d expect its animals to weigh in somewhere in the middle. But by the time hominins left Africa, the average mammals there were about 50 percent smaller than the average ones in either Eurasia or the Americas. For that reason, Smith thinks these size-specific collapses started well before the rise of Homo sapiens, and probably dates back to the origins of Homo erectus, roughly 1.8 million years ago. “That was the species that marked the shift from hominins that depend heavily on plants to ones that depend more on meat,” says Smith. “Being a good predator is a general feature of our genus.”

When hominins like Neanderthals and modern humans spread through Europe and Asia, the average mass of mammals there halved. When Homo sapiens later entered Australia, the mammals there became 10 times smaller on average. And when they finally entered the Americas, with effective long-range weapons in hand, they downsized the mammals there to an even steeper degree. By around 15,000 years ago, the average mass of North America’s mammals had fallen from 216 pounds to just 17.

Even during huge changes in climate, including several ice ages and warm spells, large mammals weren’t especially vulnerable. “When it got warmer or colder, it didn’t select for bigger or smaller mammals,” says Smith. “It’s only when humans got involved that being large enhanced your extinction risk.”

Smith calculates that if all the species that are currently threatened eventually go extinct, the largest mammal left on land will be the domestic cow. In terms of body size, our order will be back to where we were around 45 million years ago. “And that’s largely because of humans,” Smith says.