Now, a popular tourist destination, the island of Tenerife once was home to the fearsome Tenerife giant rat (Canariomys bravoi). This rat is an extinct species of rodents that was endemic to the largest of the (Spanish) Canary Islands, that are situated off the African coast in the Atlantic Ocean. 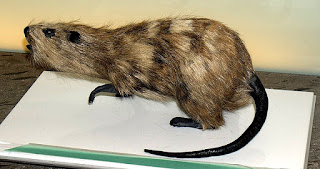 The Tenerife Giant Rat honoured his name, because it really was a big rat, measuring over 1.15 meters in length, including its tail. It had a weight of about 1.5 kilogram[1]. Its skull reached up to zeven centimeters in length. The Tenerife Giant Rat was the most imposing of its family: a related species, the Gran Canaria giant rat (Canariomys tamarani) reached a body length of 'just' 25 centimeters, similar to the size of the 'modern' brown rat.

Isolation, an abundance of food and absence of predators is the reason that some species develop extreme sizes.

Tenerife Giant Rat was a strong and powerfully muscled rodent able to move on different substrates from the ground to the trees and probably had digging skills[2].
The Tenerife Giant Rat probably infested the island, because many remains have been found during archaeological digs. Most remains are from the Pleistocene. Radiocarbon dating has placed some of the finds in the late Pleistocene, a dating that places the extinction of the Tenerife giant rat at about 11,700 years before the present era or about 10,000 BC.

After the Tenerife giant rat became extinct, the island was devoid of rodents until the Vikings arrived around 1000 AD. Mice accompanied the Vikings in their boats and disembarked when they reached the islands[3].