Sheep are herbivores and exist on a diet of grass, clover, herbs and other plants that grow in their pasture. But what happens if food supply is scarce and sheep have the choice between starvation or adaption.

The Orkney Islands form an archipelago in the north of Scotland. Conditions are harsh, the landscape is desolate and the wind can howl for days on end. But sheep still manage to live there and to survive they have adapted to feed on salty seaweed. From pure herbivores they became part-time fucivores. 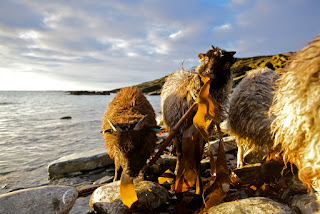 Scientists wanted to know when these sheep started to add seaweed to their diet and tested remains of sheep on the island of Skara Brae using stable isotope analysis of δ13C . They found sheep began to consume moderate amounts of seaweed from the moment they arrived on the island in circa 3500 BC[1]. This adaption helped farming spread to one of the most remote areas of Europe, although on could also argue that European civilization spread from north to south.

It is not clear whether the sheep chose to consume the marine vegetation or if Neolithic farmers added it to their fodder during the winter months[2]. The authors said: 'It is not possible to establish whether Neolithic sheep turned to seaweed of their own accord or were brought to the shore by herders. These results confirm the chronology of the gradual introduction of seaweed into the Neolithic sheep diet in Orkney, which may have been the result of changes in sheep behaviour or physiology.'

The study also found that the introduction of seaweed to the diet of Orkney's Neolithic sheep was not the start of an unbroken tradition. Sheep during the Viking period on Orkney may have been separately imported, and stable isotope analyses indicate a year-round terrestrial diet for Viking-period sheep.

The modern sheep on North Ronaldsay show far higher levels of seaweed consumption, and other contemporary seaweed eating sheep are also known on Shetland and the Faroe Islands.

The practice may not have been continuous, but it is remarkable that sheep are still able to survive in such exposed environments using the same strategies their Neolithic forbearers employed thousands of years ago.